21st Jun 2022, 5:30 AM | SevWildfang
id like to (formally!) thank everyone whos been reading thru the 2 years worth of backlogged updates and leaving comments - it makes my days a little brighter seeing yall give this whale of a story a chance!
0 Comments

Enter the Hall of Heroes

2nd Mar 2022, 7:03 PM | SevWildfang
As a visual medium that exists in-universe, Malthus Karthosian's invitation to the Autumn Gala is drenched in visual cues that his peers would immediately recognize. Let me unravel them for you!

Fig.1: The Bocanách
Representing the slain enemies of ascendent Tyvia in ancient times, every well-read citizen of the empire is familiar with this figure. The Bocanách, so it is said, was the shaman-leader of the barbarian tribes settled on the island before the Orveyan Conquest, and was granted a warrior's death after surrendering to the forces of Ghislain the Conqueror. His ritual suicide also represents the triumph of civilization over barbarism, the humbling of the untamed native before the cultured empire. He is adorned with the regalia of a barbarian witch (bronze torque and bangle, adderhorns, spiral war paint) of the divine feminine - ecclesiastical sources speculate that the barbarians' resistance was broken in spirit much earlier than by the sword, because a man assumed this role reserved for a female. But of course, what actually happened, and who this "Bocanách" really was, is lost to time...

Fig.2: Colonial Cornucopia
The visual trope of the colonial subject offering up her riches to the Tyvian observer is well known and cherished in Imperial art. She represents the people conquered outside of the homeland, whos resources become accessible to the Empire to consume and trade. Before the Tyvian Renaissance, this role was often depicted as a slave. However with the formal abolishment of slavery newer depictions choose a less servile appearance - in this case, an "exotic" dancer clad in little but jewellry and ornamental cloth. Since many of the people Tyvia robbed from their homes in their slavemongering years have taken up residence in the Imperial capital, it might even be suggested that this depiction was based on a real-life model.

Fig.3: The Eye of the Empire
The flag of Tyvia the Conquering, which descends from the war banner of its Royal House. While the Ghislains are little more than figureheads these days, in the so-called Golden Age their eldest son would carry this banner into the field during wartime. During the Empire's colonial expansion, it became the de facto flag of Imperial Tyvia. In terms of Iconography, it shares elements with the Church's visualization of God's Gaze of Judgement, hinting at a shared past.

Fig.4: The Buried Blades
It is said Tyvia was founded upon two mythical swords, Caelburn and the Ring of Nails, the shattered remains which were allegedly buried in the same Tower that these days houses the Royal family. Legend says that after defeating the barbarians with Caelburn and gaining the Ring of Nails, a change of heart overcame Ghislain when he was absolved of his sins by the hallowed Godfrey, and he vowed to never again use either blade. The shattered and buried swords then would become the foundation of his new castle, from which he reigned peacefully until his death. So it is said.

Fig.5: The Academic Creed
"Gloria in Scientiam Saecularis" / "Glory be in the worldly science" expressing the sentiment of the Tyvian Renaissance, during which Tyvian Parliament and its high society cut ties with the ecclesiastic in an attempt to wrest power away from the Church, which had become the dominant power in the colonies of Norra. This resulted in the seccession of Norra under bishops Godfrey XIV. and Savounarola II. - the Academic Creed is often countermatched with the Church's own creed: "Fluminem transitum est omnibus" / "The river is to be crossed by all" (coll. "We all have to cross the river someday")

Fig.6: Malthus, Man of Tomorrow
Malthus himself assumes the pose of the philosopher king in the centrepiece of the pamphlet. In one hand he holds the angel, symbol of the spiritual and holy, like a mundane thing of the flesh. In the other he cradles the world, specifically Tyvia's colonial holdings, casting a spell of sorcery over it with the angel's sword (Tyvia's new blade) poised to strike at Norra, which is marked by a dark nail. The message conveyed should be obvious to any observer:

"I, Malthus, have taken God's own creatures, made them my own, as a weapon to wield against those who would oppose us. Let past and present watch over me and vindicate my actions, in the name of homeland, empire, and our creed."
0 Comments

Ask your questions to the artist (or the characters!) in the comments , and receive new insight...
0 Comments

for the 2022 Crossover Exchange on Comicfury, jmluvsbob drew a name out of their hat for me to do a blind date with, and that name was Mel Cormac's comic "Waste of Time" - a tonal clash for the ages.

i did my best to merge WoT's stylization choices with mine, and im pretty happy with the result!

obviously these two will never kiss, what with both being spoken for (and the whole "tusks" thing)... but Anna and Reah make GREAT drinking buddies! 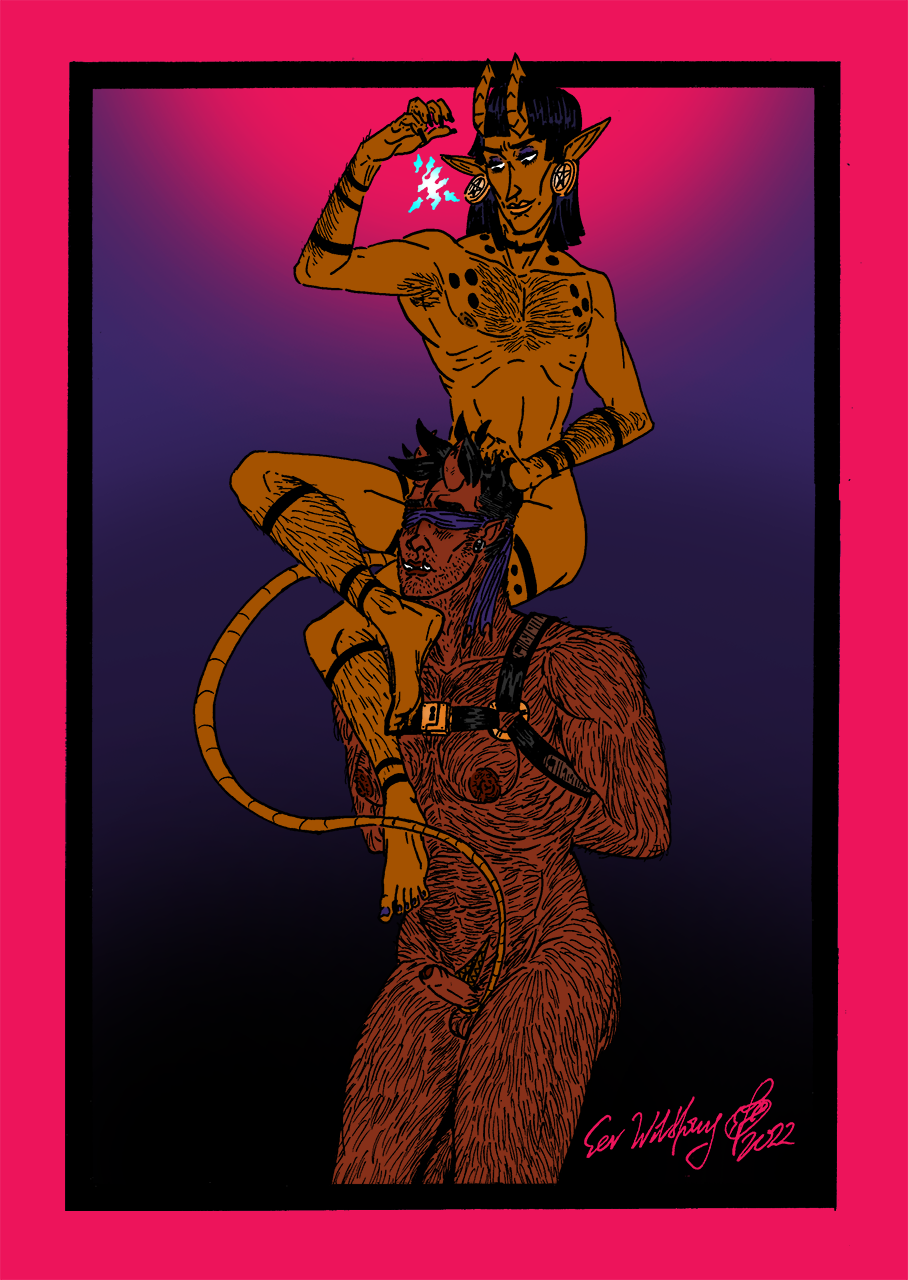 23rd Dec 2021, 10:47 PM | SevWildfang
updates to the comic will resume on January 5th, with Chapter VIII, Scene 05: "In For A Penny" - in the mean time, gather your strength and survive the holidays.
0 Comments